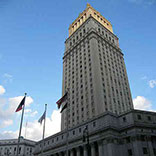 The validity of garnishments and restraints issued out of New York and served upon banks in New York State against accounts opened in other states is an issue which continually arises for banks served with garnishments and restraining notices against their customers’ accounts. There is no easy answer to this dilemma for a garnishee bank, as a garnishee could conceivably be found liable to a creditor in New York if it fails to honor a garnishment or restraint, while the depositor in a foreign state could potentially seek to recover damages for wrongful restraint against the bank in an action in the courts of that state.

In the case of Koehler v. Bank of Bermuda, 12 N.Y.3d 533, 911 N.E.2d 825, 883 N.Y.S.2d 763 (2009), the New York State Court of Appeals ruled that New York’s civil judgment enforcement statute (i.e., Article 52 of the Civil Practice Law and Rules [“CPLR”]) is not dependent upon “territorial” limitations.” In other words, pursuant to the holding in Koehler, a New York court acting pursuant to CPLR Article 52 could compel a garnishee over which it has obtained jurisdiction to restrain or transfer property held by such party, even if such property is located outside of the state. Based on the ruling in Koehler, certain New York banks, which had contractual provisions in their deposit agreements authorizing the banks to honor judicial process served in a foreign state against accounts opened in New York, routinely honored judicial process served upon them in a foreign state against funds on deposit in New York bank accounts.

The Court of Appeals’ ruling in Koehler v. Bank of Bermuda had been perceived as seriously undermining the foundation for the “separate entity” rule, which had long provided that each branch of a bank should be treated as a separate bank for the purposes of garnishment/attachment. Thus, under the separate entity rule, a garnishment or restraint needed to be served on the branch of the bank where the account had been opened in order to be valid.

There have been some Court of Appeals decisions since Koehler that did not reflect any inclination by the Court to back away from its holding in that case. In fact, the assertion that legal process issued in a foreign state against a garnishee bank cannot reach the a New York depositor’s account unless the judgment is first domesticated in the State of New York (in accordance with Article 54 of the CPLR) was advanced by the plaintiff in the case entitled McCarthy v. Wachovia Bank, 759 F. Supp. 2d 265 (E.D.N.Y. 2011) [applying New York law]. In McCarthy, the plaintiff argued that a New York judgment could not restrain a bank account opened in Florida unless and until such judgment was registered in Florida pursuant to Florida law, and as a result the plaintiff sought damages against the garnishee bank for freezing his account. The McCarthy court, relying in part on Koehler v. Bank of Bermuda, rejected such argument and ruled in favor of the defendant bank, holding that when a court has jurisdiction over a “garnishee bank, the court may order it to turn over out-of-state property to a judgment creditor.” Id.

Most cases applying the separate entity rule involved bank branches in foreign countries, but some have applied the rule to bar a restraint even where the unserved branch is located in New York (see e.g. Det Bergenske Dampskibsselskab v. Sabre Shipping Corp., 341 F2d 50, 53-54 [2d Cir 1965]). In this case, we have no occasion to address whether the separate entity rule has any application to domestic bank branches in New York or elsewhere in the United States. The narrow question before us is whether the rule prevents the restraint of assets held in foreign branch accounts, and we limit our analysis to that inquiry.

In large measure, the underlying reasons that led to the adoption of the separate entity rule still ring true today. The risk of competing claims and the possibility of double liability in separate jurisdictions remain significant concerns, as does the reality that foreign branches are subject to a multitude of legal and regulatory regimes. By limiting the reach of a CPLR 5222 restraining notice in the foreign banking context, the separate entity rule promotes international comity and serves to avoid conflicts among competing legal systems (see generally Daimler AG v. Bauman, 134 S. Ct 746, 763 [2014] [recognizing the importance of considering “the risks to international comity”]). And although Motorola suggests that technological advancements and centralized banking have ameliorated the need for the doctrine, courts have continued to recognize the practical constraints and costs associated with conducting a worldwide search for a judgment debtor’s assets (see Samsun Logix Corp. v. Bank of China, 31 Misc 3d 1226[A], 2011 NY Slip Op 50861[U], *4 [Sup Ct, NY County 2011] [stating that “the Banks submitted numerous affidavits to the effect that the computer systems in the New York branches of the Banks do not provide access to customer account information at the head office or at branches outside of the United States.”]) (Emphasis added).

Based on the recent Court of Appeals ruling in Motorola, the separate entity rule has been reaffirmed in instances where judicial process served in New York seeks to attach assets held in a garnishee bank’s foreign ranches. However, based on the very language of the opinion in Motorola, the separate entity rule has not been extended in the context of domestic garnishments. Consequently, the decision in Motorola should not impact the practice employed by some banks which honor executions and restraints across state lines (i.e., since the holding does not extend the separate entity doctrine to domestic bank branches) although the ruling in that case has by some been deemed as evidence that the separate entity rule remains viable. The validity of the practice employed by banks which honor executions and restrains across state lines, however, remains a hotly contested issue and the source of much litigation.